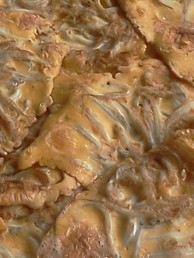 Before I get to the recipe – which can’t be easier – what is it with summer time television? Ok, we can live with the odd rerun – let’s face it, watching idiots trying to smuggle food into the country a second time is still funny – especially listening to their explanations for doing so. But, where on earth do shows like Renters come from? Who makes them and who watches them?! And, why are they on as I sit down with my glass of wine and dinner? Perhaps it’s a sign to turn off telly and engage in a real conversation.

Back to the extended birthday celebration of last week. The quiet family occasion consisted of fish ‘n chips, waitbait fritters and champagne. Not much wrong there.

My father-in-law makes a mean whitebait fritter. While good New Zealand whitebait isn’t cheap, it goes a long way so turns out pretty cost efficient in the end for the number it will feed.

While the temptation might be to tweak the recipe and add a bit of this or a bit of that – don’t, it’s great as it is. Especially served in between two slices of buttered white bread (yes, I know family, you never thought you’d hear me utter that sentence!).

An aside, I say serve with lemon. However, I’m not sure what the go is with lemons in Wellington at the moment, but they are in short supply. I begrudge having to buy lemons given the abundance of them in the backyards of Auckland family – but occasionally I have to. They were far and few between in Wellington supermarkets last week (which is why there isn’t a photograph of one) as I searched in vain to soothe the sore throat. The ones I did finally find after three days of looking were of the dreadful hard waxed variety.If anyone has some spare juicy lemons, I’m your gal. Will trade you for some baking.