“I’m going to shut the door and you’ll be stuck in the room all day”, giggled niece (9) as the door slammed shut. I quickly curled myself up in the bottom bunk (top one too hard to climb to) and thought about what I could do with my day locked in the bedroom. 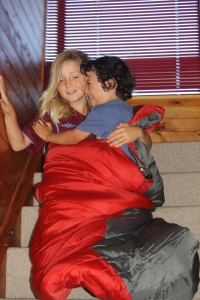 Sleep was high on the list – but, hard as I tried, that wasn’t going to happen. It may have been something to do with four kids racing around the room outside and flinging themselves down the stairs in sleeping bags. And, sadly, once my midget started beating up his older cousins, my short lived moment alone was over.

A little later, after scooping up the carnage (and helping myself to a glass of wine – purely to calm the nerves), I give some further thought to what would I do if I had a day or two to myself locked in a room. Taking a bit of creative license, I decided that room would have to be the kitchen.

And what I’d do – simple. I’d go through the ever-increasing pile – or to be correct, many piles – of recipes that litter each room. You know the ones I mean – you’ve all ripped them from various publications in random places and set them aside meaning to make them some time. Then, once every couple of years, you do a half-hearted cull and the rest of the recipes go back into the pile until the next cull.

In my two days of bliss I would ruthlessly go through the piles, by now compiled into one heap reaching the roof. Then I’d get out the nifty label maker I bought the other month (because it was such a ‘great’ deal) and label five or six clear view folders. I’d group each  category of recipe and they’d sit inside their designated folder – but, wouldn’t make it between the clear pages until I’d tested the recipe and knew it was good. If not, it hits the recycle bin.

Speaking of recipes pulled out of the paper and filed, here’s a simple one that I have actually made. It works well in autumn before the need for a more hearty winter soup. It appears it is from the Herald’s Viva insert back in 2005. There’s no chef to credit (maybe I missed that bit with the rough tear) and I have altered the recipe a little over the years.

1 stick celery, finely chopped (optional – if you have a stick lying around) 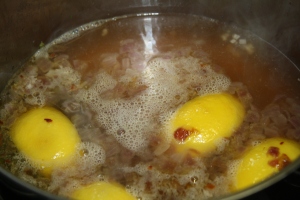 Heat oil in a medium-sized heavy bottom saucepan. Sweat the onion for five minutes, stirring so it doesn’t burn. Add the garlic (and celery,if using) and cook for another couple of minutes.

Add the lemon, bay, cinnamon stick, chilli flakes, stock and 250ml of water (or 500ml if you want to stretch the soup a little further).

Remove and discard the bay, cinnamon and lemon. Skim any foam from the surface.

Serve garnished with coriander and lemon zest. (Those eagle-eyed of you will notice that I’ve used Italian parsley instead of coriander, as that’s what I had in the garden last week.) Don’t forget the crusty bread – which, of course, you can make it yourself with my easy recipe.

This is best served – especially if you are making for guests – not long after cooking it. However, leftovers do keep well for the next day. Just remember that the orzo will further swell so you may need extra liquid when warming. And, do make sure you’ve discarded the lemon from any leftovers as the lemon flavour becomes too dominant when left overnight.

I’m now off to do something with the three piles of recipes sitting next to my bed. Bring on my solitary confinement!