A funny thing happened this week. Bad hair day, needing to leave the house in minutes, toddler mis-behaving. To be fair, pretty much like any other day.

Grabbed my useless straighteners, not knowing what I’d do with them. Owned for years, but rarely used as they’ve never really worked. Well, I’ve just worked out why. When I turned them on and accidentally hit the plus button, the temperature setting kept going up. What I’d done on each previous use was hit the minus button down to eight as I mistakenly thought the starting number of 15 was the hottest. Unsurprisingly, when I used it on 22, the jolly thing worked and my hair looked significantly better quickly. Dhaaa!

Another shock came when perusing my gorgeous Little and Friday Celebrations book (thanks Janine). I’m a big fan of soft nougat – I’ve even visited Dentecane, a Southern Italian town famous for nougat (torrone). But I’ve never found a recipe for the soft gooey type, just the hard chewy stuff.

It was with absolute delight that the book (which, by the way, I love even more than the first L&F book) featured an easy-ish looking recipe. The fright came when I took a look at the ingredients – not for the faint hearted, nor for diabetics. It is essentially just sugar. And, lots of it. Three kinds of it in fact. I’m not sure what I thought was in nougat. I guess I didn’t think – maybe it’s all those ‘low fat’ signs next to nougat in shops that have lulled me into a false sense of security.

I’ve now made it twice, with pleasing results. The original recipe calls for manuka honey, which I haven’t used (my little jar is too precious for using so much for testing) and I’ve had limited luck with rice paper sticking to the nougat.

However, the recipe is sound and I will give it another go when I have all ingredients at hand in correct quantities. This is important as it is a bit of a science to get it right. Substitutions probably won’t work. I didn’t have quite enough liquid glucose for my last batch and the result was too sweet and honey-ish. Also, a candy thermometer comes in handy – they are not expensive and will help you get a good result.

The book uses cup measurements, which surprised me for a pastry chef. I prefer to go by weight – especially with the gooey ingredients. I find it easiest to put the pot on the scales and pour the ingredients in. I’ll list both. A stand beater (like Kenny) is helpful. You could use a hand beater, but a second pair of hands would be useful to help with the hot syrup. My method is slightly adapted.

Line a sponge roll or baking tin with rice paper. Combine 50g each icing sugar and cornflour and sprinkle or shake half of it over the rice paper. 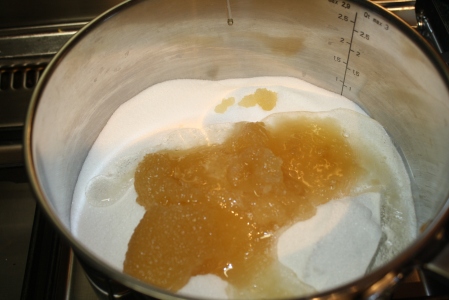 Combine the sugar, honey and glucose in a heavy bottomed saucepan.

Stir with a wooden spoon over medium heat until the sugar dissolves – this takes about 10/15 minutes. It will begin to boil – let it continue to boil, without stirring, until the mixture reaches 110C on a thermometer.

Meanwhile, chop the fruits and nuts.

While mixture is boiling, beat the egg whites to stiff peak stage. (You don’t want to beat your eggs too early as the peaks will not hold and egg white start separating out below the surface.) If your beater has a splash guard, take this off first.

Put some cold water in the sink/basin. When the sugar syrup reaches 140C, take it off the heat and pop into the water bath for a minute or so to stop the cooking process.

Turn the beater back on and slowly pour the sugar syrup into the egg whites in a steady stream. You want to beat it until the mixture has cooled down and it is thick and glossy. I find this takes about five minutes.

Fold through the fruit and nuts using a metal spoon or spatula.

Quickly spoon the mixture into the prepared tray, flattening and ‘stretching’ it as you go.

Cut to desired size with a very sharp or serrated knife. Devour.

As for the book, it is lovely. There are some fantastically simple styling ideas to complement the divine recipes. Sure, the recipes contain lots of butter, sugar and eggs. But, they are for celebrations. Head off the library and borrow a copy for a few weeks. Then I’m sure you’ll be off to the book store to buy one. Despite what you can access online, I still adore the look and feel of books.

Oh, and by the way, I’m now on facebook. It will give me a chance to add quick posts and ideas. Like my page so you can see at a glance what I’m up to.

5 thoughts on “Fancy some sugar with your sugar?”