Life seemed more defined and less complicated when we were kids. Christmas was cherries and strawberries and Easter brought chocolate and hot cross buns. Unlike now when strawberries are available almost all year round and buns hit the stores about the same time as the Christmas sales.

What happened to a season for everything – something to look forward to? Not to mention air miles and keeping it local.

It probably happens to everyone at some stage – a yearning for some elements of the past (maybe clouded by fuzzy only good memories). The days when Easter meant no lollies during Lent and a jar full to break into on Easter Sunday. Of course every family had one sibling who would sneakily slip greasy fingers in to the large glass jar during the 40 day fast (didn’t they Paula?).

With Easter coming up I thought it was a good time to try a traditional treat from elsewhere. After a bit of snooping around, the word kolaczki kept appearing. I’ve never made anything Polish before and the recipes all looked doable with mainly pantry staples. While these seem to be served at Easter time in Poland, I get the feeling they are an all round ‘festive’ time treat.

Kolaczki are simply short pastry, with the interesting twist of being made with cream cheese, filled with jam (or whatever you like). This recipe used my last supplies of Lewis Road Creamery product, together with some homemade butter (never waste over whipped cream, keep beating till you get butter).

Filling: eg. jam, curd, almond paste (in the US, they use pie filling)

Beat together the butter and cream cheese till light and fluffy – a beater makes this quick and easy.

Add the flour in three or four batches, mixing until just combined. 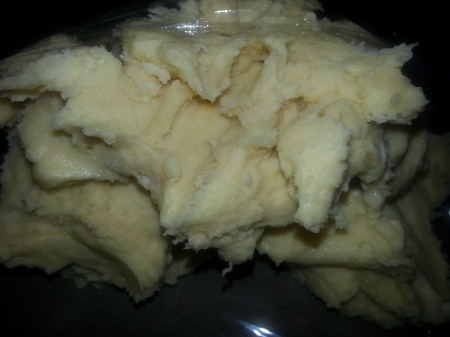 Wrap the dough in cling film and pop into the fridge for several hours (at least). You may want to divide the dough into three to make it easier to work with later. I made the first batch after the dough being refrigerated for an hour, but it really wasn’t long enough and was quite tacky to work with. I made my next batch a couple of days later and they were great. 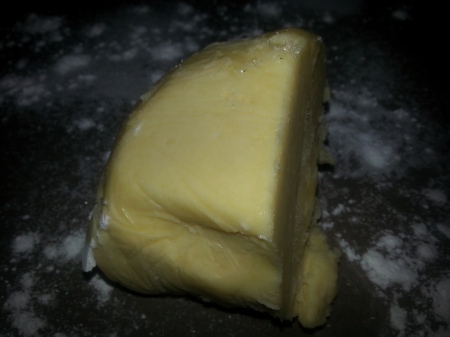 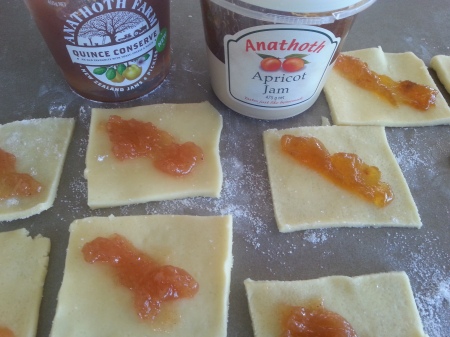 Sprinkle your work surface liberally with a mix of caster sugar and icing sugar. Roll out the dough to 4/5mm thick and cut into 5cm squares (or circles if you prefer).

Put 1/2-1 tsp of filling diagonally across the dough, finishing about 1/2mm from the edge. I used a mix of yummy Anathoth Apricot jam and Quince conserve to fill mine. Bring two opposite corners to meet in the middle and press lightly (as in the photo – don’t ask me the shape). 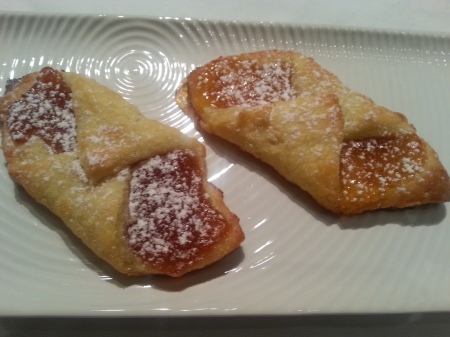 Bake for 13-15 minutes until the dough begins to brown. Cool on wire racks. When completely cold, sift icing sugar over the pastries. Icing sugar will soften the pastry, so only dust when you are about to serve.

The kolacziki can be free-flow frozen before the cooking stage.

These are so delicious for the lunch box – if they last that long. Six disappeared off my cooling rack as Master Three helped himself at every opportunity.

Upon further investigation, it seems many eastern European nations have something similar and I’m sure there is a long standing pavlova like argument as to who invented it. I don’t care, I’ll call it a tie if they all taste this good.