As I held my two month old baby, I remember my sister saying, “you can’t imagine it now, but one day soon you will yell at your son”. Of course I said, “you’re wrong, why would I do that?”. Of course, and it kills me to admit it, she was right.

When you find your three-year old trying to climb inside the fridge to grab something they’ve been told they are not allowed, after a series of other testing activities over the past five minutes, while trying to keep dinner on the stove top, reasoning can go out the window. Voices can become raised in slightly irritated tones. And you hate yourself for it, it’s not how you imagined things. And I’ve only got the one child to wrangle!

It’s taken me a while, but I’ve had to come to grips with life not being the same as it was. I was lulled into a false sense of security with an angelic baby who never cried (really!). I’ve since found that no matter how organised you are, something will make you run late. And I’m finally getting to be OK with that. My OCD has been cured.

Although it seemed an impossible thought a few years ago, I’ve managed to let go. Somehow, becoming a mum has made me more relaxed. I’ve realised most people muddle along and you can only do the best you can do. What seems right one day, isn’t always the next. There’s loads of contradictory theory out there and lots of people wound up in first world issues or particularly passionate about one cause or another. The trick is not getting caught up in it and being confident in your decisions.

Sometimes it’s not so straightforward though. One thing I’m struggling with is the food thing. Or, that should be the lack of food. It’s incredibly complicated what one can and can’t put in pre-school lunch boxes – and it’s different in every setting. As for trying to offer home baking for the class, unless it’s vegan, they don’t want to know.

It seems to me that we have a system that is over complicated and apologist. There’s a big difference between life threatening allergies, mild intolerances and self-selected exclusions masquerading as an allergy. There must be a better way than excluding almost every food group from pre-schools.

I understand touch allergies, anaphylaxis and the impact of environmental change. But I do fear we are at the risk of creating blandville and not allowing kids to build resilience by over sanitizing. I know this is a polarising topic, maybe I’d feel different if my child had a serious condition. However, I’m not completely blind to it. I have nieces and nephews who suffer and I’ve seen them manage from toddlerhood with little incident. This is going to be an interesting path to navigate in the coming years.

In the meantime, here’s a recipe with so few ingredients that it will be allowed in most settings (except our kindy – cinnamon’s a no-go zone). Churros, the ever popular South American or Spainish doughnut (containing no nuts of course). So easy. I’ve tried making them with and without eggs and have had best luck without.

In a small saucepan, over medium heat, combine the first four ingredients.

Bring to a boil and remove from heat. Stir in flour and mix with a wooden spoon until mixture comes away from the sides of the pan and forms a ball.

Set aside for three-five minutes to cool a little.

Put the dough into a pastry bag with a large star nozzle. Pipe similar size strips of dough onto a plate. You’ll need a large nozzle as the dough is quite firm. You can always roll them by hand and cut even sized pieces if you don’t have a nozzle.

Combine the second measure of sugar and the cinnamon into a bowl or onto a plate. Then prepare a dinner plate with disposable hand towels for draining. 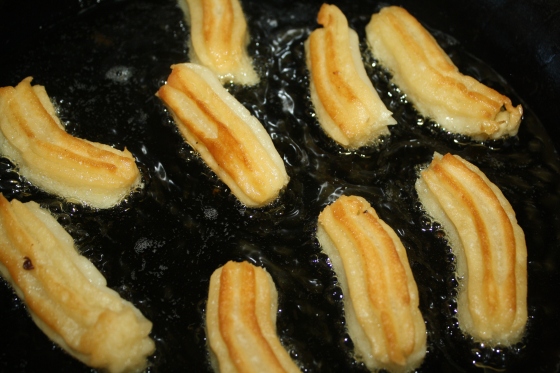 Heat some vegetable or ricebran oil in a fry pan or deep-fryer. Cook the churros in the hot oil, not overcrowding the pan. You will need to do this in batches. I use the shallow fry method, so they take about 4-5 minutes on each side.

Remove cooked churros from pan and pop onto the prepared plate to drain briefly. Then roll the churros in the cinnamon and sugar mixture.

Before you ask sisters, yes, they’ll be on the Easter menu.