Writers block has hit at a time when I have so much to say. I am recently back from the long-planned gal’s trip to Melbourne. Half marathon run (the six weeks of sobriety pre-Melbourne was worth it), shopping done, food consumed, cocktails drunk, Ikea visited. Is Melbourne always this good? I ask myself if I would love the place so much if I lived there and had a regular everyday schedule? I think I would and that this is more than a holiday after-glow. Sure, I wouldn’t be shopping all day long but I don’t think I’d ever tire of the choices when it comes to food, the availability of fresh seasonal ingredients and the massive influence the Italians, Greeks and Chinese have on the food scene. 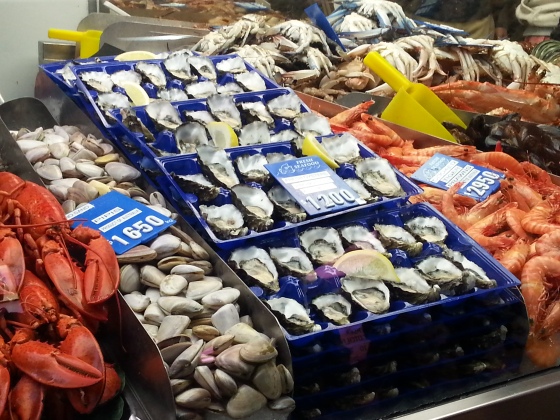 Highlights peppered each day, as we discovered places unseen and new ideas. Here’s a taste of new favourite places/things. The Foodies’ Dream Tour of the Queen Victoria Markets. I’ve been to the markets numerous times and usually leave somewhat frustrated that I can’t buy to take home. The two-hour tour gave me a renewed love of the bustling market place. It was interesting, crammed with tastings and very good value at A$40 each. 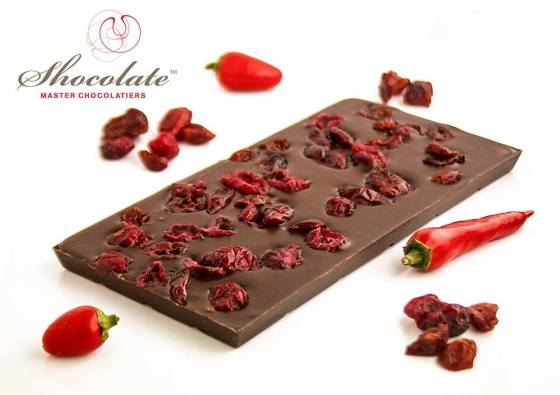 A gorgeous discovery was Shocolate in Fitzroy. While the chocolate was out of this world, the service was even better. I left with some innovative “chocolate for cheese”, wafers of dark choccie to break and add to a cheese platter. I chose the toasted black and white sesame seeds option to bring home. Shocolate offered a brilliant wine, cheese and chocolate platter – unfortunately we had over indulged at Brunswick Street Alimentari. What a gorgeous deli/restaurant. It was buzzing and crowded – crazy for a Tuesday lunch time. We enjoyed a glass or two of vino over an Italian inspired lunch. 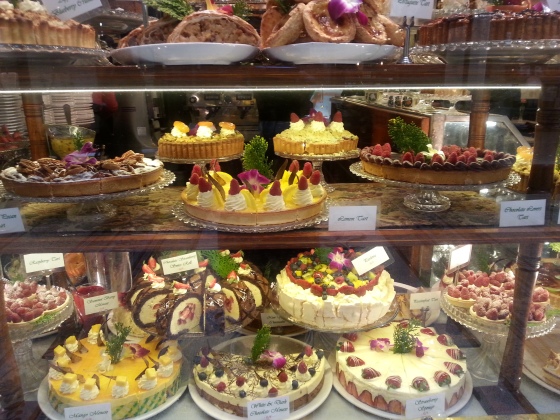 Another favourite was just across the road from our Collins Street apartment, Hopetoun Tea Rooms. Their window rivalled anything I saw in France. The queue to get into the place was constant. We sneaked in on opening at 8.00am so one of the gals could get her fill of Raspberry Lamingtons before hopping onto a plane home. Any time is cake time I say! 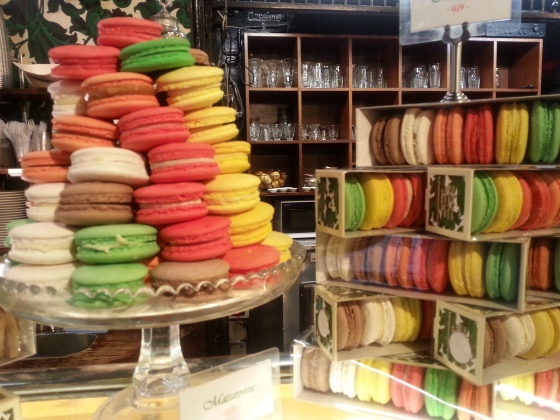 With Hopetoun in mind, here’s a recipe for the classic macaron (Hopetoun also offered an array of macarons). I  realised that I wrote all about making macarons two years ago but never got around to posting a recipe. So, here you go, macaron using Italian meringue with recipe from La Cuisine. This recipe can’t be hurried, so resist the temptation to multi task and focus on just the macaron. You won’t be disappointed, if you follow the recipe. Note that exact measurements are important.

Electronic scales will also be handy 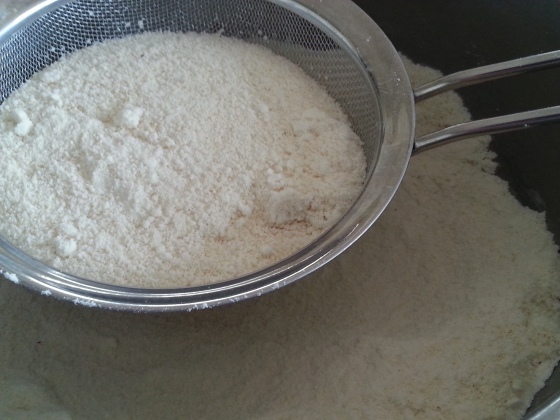 Sift the almonds and icing sugar together into a medium/large size bowl. If you have time, double sift this mixture. 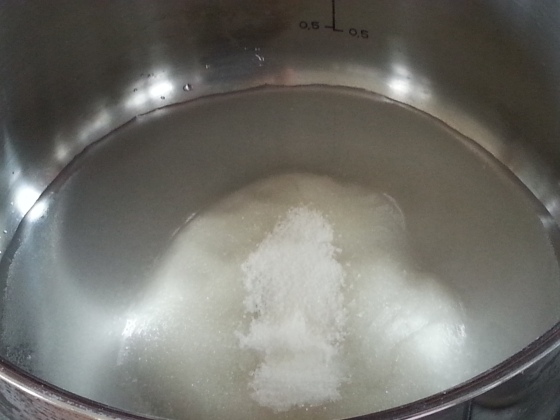 Bring the sugar and water to a boil in a small/medium saucepan – shaking the pan gently from time to time to make sure sugar crystals don’t stay on the sides of the pan. (Do not be tempted to touch the sugar mixture at any stage as it will burn you.) 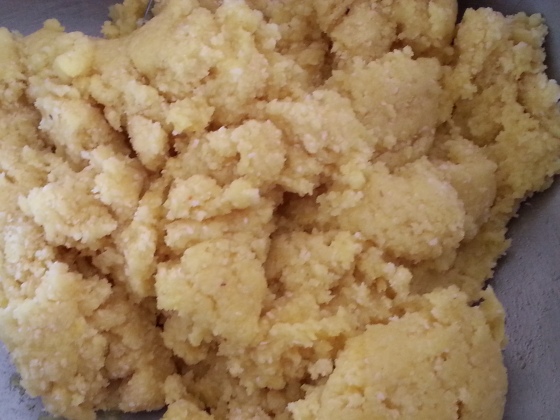 When sugar is beginning to boil, mix in the first measure of egg whites into the almond/icing sugar with a spoon (will be quite stiff). 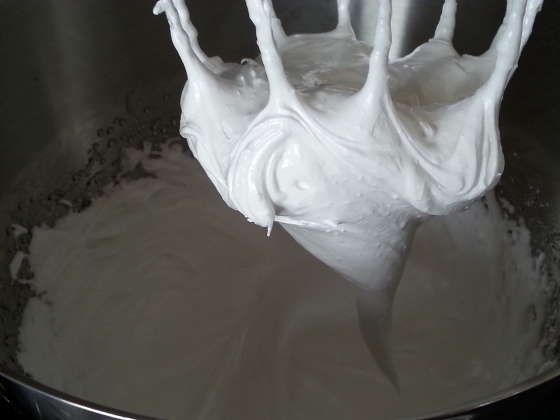 Beat the second measure of egg whites till just before hard peak stage. 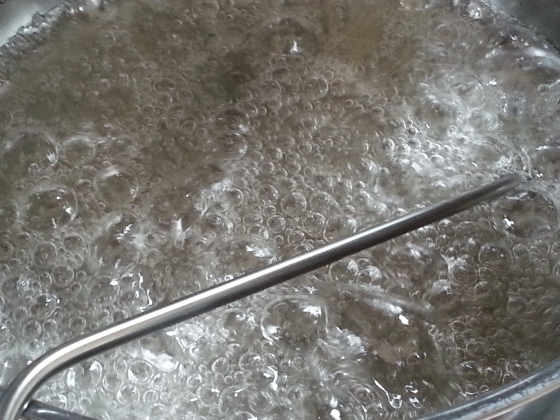 Once sugar reaches 118°C, carefully pour it into the egg white mixture beating continuously. Beat until mixture cools to about 50°C. Note, if using a free standing beater, take off the splash guard as the sugar syrup may stick to it. Also, try to avoid the beater blades when doing this step – having someone to help is handy, especially if using an electric hand beater. 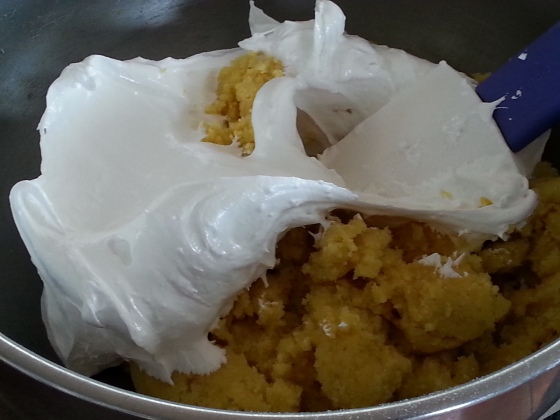 Carefully fold the meringue mixture into the almond mixture (in two-three batches) using a spachelor. Don’t over mix. Add the colour (can separate the mixture to create several colours, but I’d recommend beginning with one). The mixing part is called “macaronage” – you can check out how to do that here (it’s worth watching a few different videos). 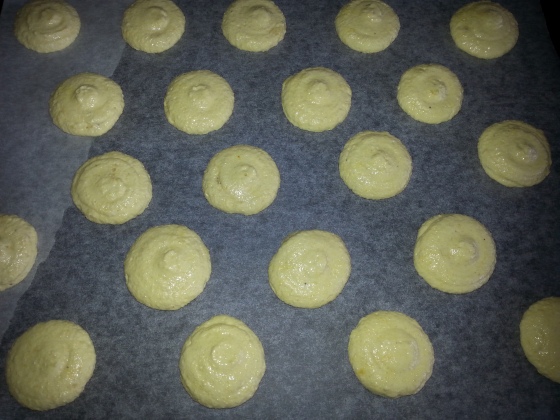 Put mixture into pastry bag with 5-10mm nozzle. Pipe into 20mm rounds, leaving about 15mm between each cookie. (If you have little ‘tips’ on top, very lightly dip your finger into water and tap it down so the macaron shell is flat.)

Lightly tap the baking tray against the bench a couple of times. Set the trays aside for 40-60 minutes until macraons form a light ‘crust’ (time will depend on humidity). Note: a slightly runnier mixture than photographed above is ideal, but these still worked. Bake in a 150-160°C (temperature will depend on your oven) pre-heated oven for 10-12 minutes. 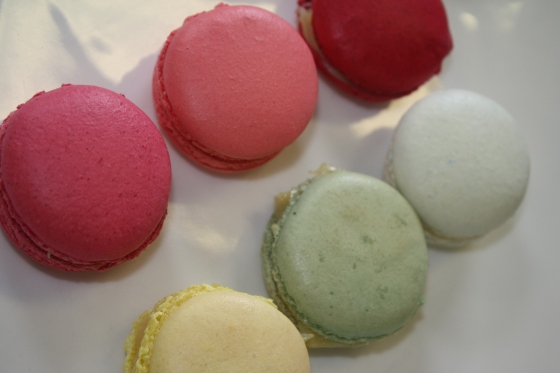 Cool on racks, then remove macarons from baking paper and fill with ganache (or filling of choice). This recipe will make about 25 macarons (50 individual cookies). Do persevere if at first you fail – I’ve used a tonne of ground almonds getting it right. It’s cheaper to buy ground almonds in quantity (from wholesalers like Gilmours, Toops, Moore Wilsons etc), then store them in the freezer to keep them fresh. Just remember to bring what you need to room temperature before using them (this doesn’t take long). Happy experimenting, it’s exhilarating the first time they work. And they will.

2 thoughts on “Musings from Melbourne”