It’s been a big month. My little guy started school last week – and judging by day three’s question, “Mum, how many sleeps till Thomas and I go to university?”, I reckon he’s settling in OK.

He’s been a bit of a handful in recent times so I am watching with interest how his behaviour modifies now that he’s the new boy in a new setting. He’s under the guidance of an encouraging, warm, super smart, and pleasingly firm new entrants teacher. I say he’ll be in for a shock – you can’t do what you want when you want at school.

Motherhood has reminded me that things are always changing – as soon as you get used to “a stage”, it’s time to move on. I’m feeling more wobbly than the little guy is in this particular time of transition – probably because I begin to lose control. 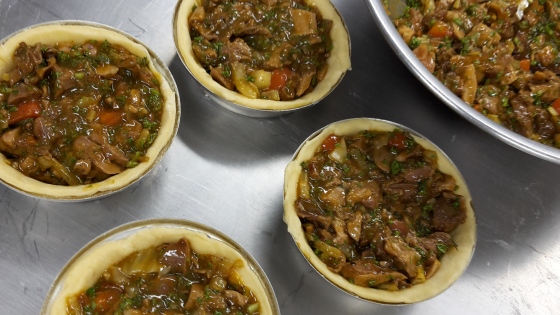 My year of change has come to an end. I’ve managed to foot it with classmates half my age (and younger). I’ve learnt loads, eaten more butter and cream than I thought possible, chopped a rabbit (and put it in a pie), filleted a flounder (why?), passed offal week, badly chopped a finger, and survived a fondant disaster. I even managed to pass my final exam with distinction.

Probably my only frustration of the year has been that our cooking wasn’t able to be graded. Common’ NZQA, nobody is satisfied with “competent” and “not yet competent”. Just because cheffing is considered a trade doesn’t mean people don’t want to achieve at a top level and improve on previous performances. Students don’t deserve the mediocrity this system encourages. Yes, I can hear you now – the words of a typical “mature” student. But they are relevant across the board. Lowering the bar lowers expectation of self. It’s made me think about the education system in a new light. Not so much for me, but as my little guy turns into a big guy and education choices need to be made.

Ok, off the soap box now. The great side of the year has, of course, been the cooking. And while my writing hasn’t kept up with what’s come out of the kitchen, I can assure you that the year exceeded expectation (that’s my puff pastry creation). Just don’t ask me “what’s next?”, because I’m still figuring it out. But that’s ok, I can cook and think.

I get little obsessions with food and at the moment it’s caramel sauce (yes I know, shoot me, it’s all sugar and fat). I try to keep a jar in the fridge so I can flash up some biscuits or ice cream in a tick. Here’s the recipe I use, along with a good basic bikkie recipe.

If making salted caramel, add 1 teaspoon salt (I usually add salt to what I am add the caramel to, but it can easily be added to the caramel itself)

How to make itNote: this is super-hot and not ideal for little fingers to make. On the subject of fingers, don’t dip yours into the mixture as you will burn yourself. Badly. If you are planning on keeping the caramel, it will keep in the fridge for a couple of weeks, so sterilise a jar to pour the mixture into.

Put the sugar in a heavy bottomed saucepan – one that is bigger than you think you’ll need. Melt over medium heat and “shake” the pan until the sugar crystals melt. Some people stir it, I prefer not to. Whatever method you use, make sure you don’t move away from the stove. This needs your constant attention. 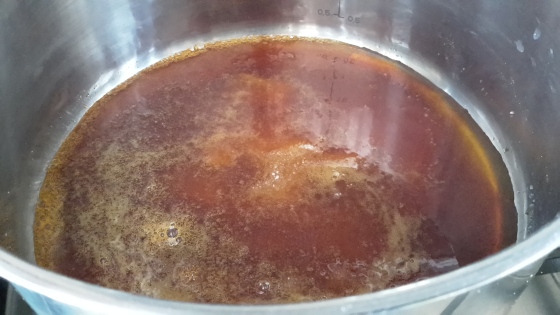 Once the sugar has melted and turned a rich golden colour, remove from the heat. Sometimes, I remove it from the heat earlier, give it a little shake, then put it back again – so the sugar doesn’t burn. If adding salt, do it now. 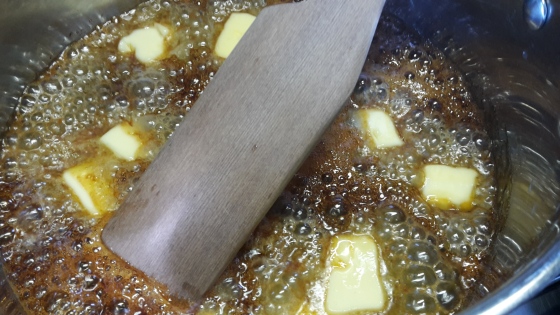 When you’ve taken off the heat, drop in the butter cubes and mix with a wooden spoon. Be careful as it does splatter and bubble. Then add in the cream and put back on the heat for about 30 seconds, mixing all of the time.

Let the mixture sit for a few minutes before pouring it into your prepared jar – do not pour into plastic as you will probably melt it (blahhh, burnt plastic is toxic and smells revolting). That’s it. Simple. Do keep it at the back of your fridge as you’ll be ducking in for spoonfuls if it has a prime position at the front of a shelf!

Make sure it is cold when you put into the bikkie mixture.

If you just want to make a basic bikkie with no caramel or choc chips, you can use this recipe – or you can add almost anything you like.

125g butter, softened but not melted

125g brown sugar (you can use white, but I like the flavour of brown)

5-6 Tbsp caramel (from above recipe)

Cream the butter and sugar until light and fluffy. Add in the egg and golden syrup and beat well. Mix in the flour, and salt (sifted together), then the chocolate chips. 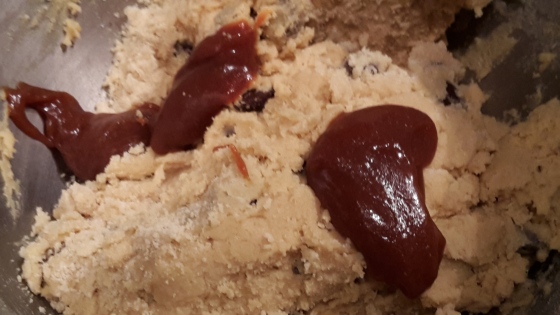 Pop dollops of the caramel into the mixture. 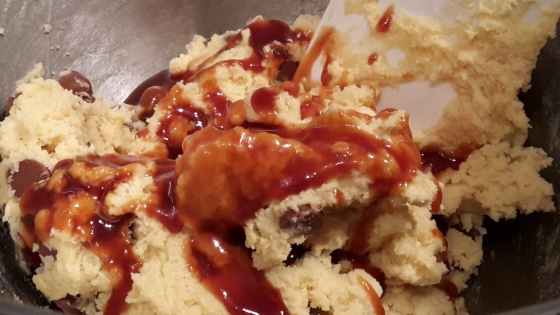 Lightly mix the caramel though.

Drop large teaspoonfuls of mixture onto the prepared trays. Make sure you leave room for them to spread out. I then lightly press them with a fork. 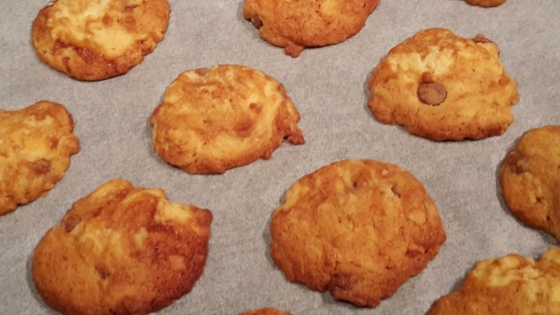 Bake for 12-15 minutes, until golden underneath.

There you go. I made four batches of these last week, the last one for our friends at Good Bitches Baking. Yay, it’s nice to be back on the roster after a little break.

Happy caramel making! And, step away from that fridge with your spoon……